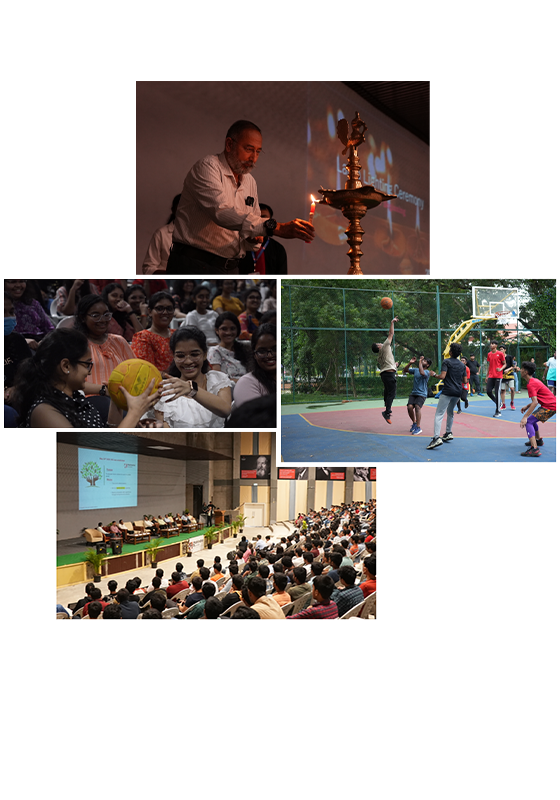 September 8, 2022: With the beginning of a new semester, Mahindra University organized an orientation session for the incoming Batch of 2022 on September 8th, which marked the start of their journey to becoming engineers.

It was a three-day long event, divided into three categories. On the first day, newcomers were introduced to campus life and to the rules and regulations of the University. The club heads also introduced the different clubs at Mahindra University to give an understanding of the various student activities on campus.

The following day was marked by various sports events for the Freshers. The sports enthusiasts had a wonderful time showcasing their talents. The final day was the Academic Orientation where the Deans and Heads of the various departments spoke about the academic and research activities that are carried out at the Ecole Centrale School of Engineering, Mahindra University. The students were also briefed about the different aspects of the engineering curriculum and how the world cannot function without the curiosity and passion of engineers.

The orientation started with Saraswati Vandana performed by two third year students. The lamp was lit by the Registrar, Col. Rajive Chauhan and the Chief Coordinator – Student Affairs, Major General Sukesh Rakshit. Subsequently, Major Gen. Sukesh Rakshit briefed the students about the life on campus. With his inspiring words, he also alerted students about the strict rules and regulations that they need to abide by at all times. Following his speech, Dr. Salome Benhur educated the students about the PoSH (Prevention of Sexual Harassment) Internal Committee and encouraged students to not shy away and report in case of any issues they may face.

Like always, the music club did not fail to entertain this time as well. Their performance made the audience groove. The General Secretary then, introduced the newly appointed Council Members to everyone. Before breaking for lunch, all the club heads introduced their respective clubs and their membership rules. After lunch break, students had an informal Q&A session with the current and ex-council members. Students played Dumb Charades and Passing the Ball followed by wonderful impromptu performances by the Freshers. ”I am from Qatar, and I thought Indian Colleges were only meant for studies. Thank you for changing my notion. You guys are amazing and thank you for such an amazing day.”, said a first-year student. The day ended with a jaw-dropping rap performance by a third-year student.

The next day was for sports enthusiasts. The sports secretaries took the students around and showed them the campus and the various sports facilities. Students played badminton, cricket, billiards, football, table tennis etc. The rain couldn’t dwindle their enthusiasm. “This is more fun than what I anticipated. The first-years are very talented and looking forward to their selection in MU Basketball Team.”, said a third-year basketball player from Mahindra University.

On Monday, students once again gathered in the auditorium for their academic orientation. All the Heads of the Departments introduced themselves and their respected departments. They impressed on the students how important it is to study, and collaborate with each other. They made it very clear that the line between each department becomes very blurry while dealing with real world problems. Afterwards, students had a QnA Session with the Professors, where they asked questions about academics, courses, and the course relevance in the present world. Following that, the day finally came to an end with words of encouragement by Prof. Salome Benhur - Head of Department (Humanities and Social Sciences).

The three-day orientation is the first event organized by the new student council. Many freshers were noticed and the respective club heads are excited about collaborating with such budding enthusiasts, eager for them to be a part of these clubs. The new students laughed, enjoyed, and gained knowledge. Now, it’s time for them to prepare for classes and enjoy their stay at Mahindra University.